I don’t talk about money much around here, and that’s mostly because there are a bunch of resources out there on budgeting, accounting and whatnot. That though, doesn’t mean it’s not important.

Freelancing has turned my relationship with money on its head, and that’s from earning to spending and all the way back around to saving. While my first lean years of freelancing forced me to rethink a lot of how I worked with money, I’ll be honest with you…I can’t stand budgeting. I do it, I keep spreadsheets. I’ve used apps, and planners, and systems, but even when it’s minor work, for me, it’s still work.

That feeling has led to me taking a more organic approach to my money. A big part of that is paying attention to the real drivers behind my spending.

I’m not a fan of saying I can only spend $100 a month on clothes if I’m not asking why I’m spending even that. Let’s just say freelancing has forced me to ask “why” a lot more than I probably would have if I were still employed.

I want to share a few of those points with you in hopes that it will help you develop an orientation toward spending that feels less like a burden and more like a natural alignment with your new life as a freelancer.

Hear what I’m actually saying now…I’m not encouraging anyone to ditch their budget and feel their way through their finances. Not at all. I simply want to share some of the spending motivations I’ve uncovered because of freelancing (and preparing to freelance)…if you’ve got any yourself, drop them in the comments! 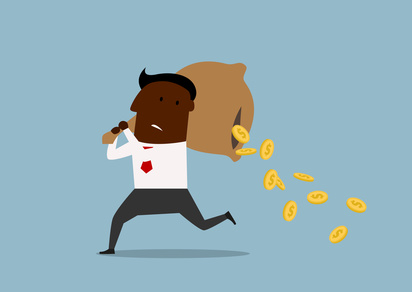 This is number one for me. From clothes, to jewelry, to food, a LOT of my spending (and the behavior that lead up to it) was a direct result of feeling sad, bored, disappointed, disillusioned, confused, or just exhausted.

Once the dust settled from being laid off I noticed the Amazon boxes slowed down on their own and I wasn’t opening flash sale apps nearly as often.

You might have a similar connection between your emotions and spending, even if the signs are completely different. They might be take out boxes, plane tickets, or even movie stubs. Once you figure out your signs take some time to pay attention to patterns and habits you might have developed.

Who You Hang Around

A lot of our spending is social.

When I stopped dancing salsa I spent less on clothes and shoes. When I stopped attending a Black church I stopped needing more formal clothes. The restaurants, movies, and stores where we drop our money are all heavily impacted by the people we spend our time around. When I started taking the time to be more intentional about my socialization, I saw those expenses quickly shift.

Side note…I think I started separating from the employed crowd real early…probably a few years prior to actually leaving employment. By the time I was laid off, my friends consisted mostly of fellow indie workers and people who were at least actively disconnecting from the culture of employed life. That meant all my friends had spending lives and financial goals that were similar to my target lifestyle.

Sometimes it’s easy to miss the impact of your spending.

I seldom looked at how many pairs of unworn-shoes I had piling up. I pretty much ignored the collection of blouses that had never seen the light of day and steady pile of new hair products and oils that were accumulating under my sink.

A steady paycheck can make that easy to do if you’ve got disposable income. Now though, whenever I start buying for no good reason, I can more quickly identify things I’d actually use, meaningfully enjoy, or need.

OK…so for me, this mostly applies to food, but you can really extend the concept into any area where you spend or possibly overspend.

Planning and prepping my meals…even loosely, made a huge impact on where my money flows. Keeping snacks around does the same. If you live in the U.S. especially, there’s food EVERYWHERE. Even if you’re not thinking about it, an ad will remind you (more on that in a second), so simply having an idea of what I was going to eat for the week effortlessly cut down on pointless runs for takeout (that I didn’t really want that bad in the first place.)

I like trying new food. I like festivals and farmers’ markets, and  picking up weird stuff from the grocery store. (I can’t tell you how many times I’ve had to explain to a cashier what something in my cart was.)

Toss a picture of a mozzarella stick in front of me and I’ll genuinely want it. I am highly susceptible to food advertising. That’s why one day I decided to cut it off. I had to unsubscribe from pretty much every food email list I was on…and unfollow pretty much every food account on Instagram…and Facebook…and Twitter.

I know that sounds extreme, but for me, food photos are a trigger to spend on things I might like (like having a pie shipped from across the country), but that I likely won’t get too much return in enjoyment from in comparison to what I paid for them. I still allow myself to spend on food as fun, but I make sure I get the most fun possible out of my dining investments.

As freelancing gets more popular, so does the market around it.

That means courses, conferences, apps, and software…all competing for your independently-earned dollars. If you’re not certain what you’re doing, you can end up in a state of constantly jumping from one new investment in your business to another with little return.

That’s why having clear goals for your weeks, months, and years is so important. If you know where you’re headed and keep up good habits, you won’t be tempted to spend on things you either don’t need or aren’t yet ready for as a freelancer.

I don’t know about you, but workout gear aside, when I’m in better shape, I spend less.

When I’m in a good rhythm of eating and working out, I feel focused and buying things isn’t near as rewarding as it is when I’m not feeling as good or good about myself. (Problem is, those periods always come with bumps, so I’m learning to forgive and accept myself in any state so that one bad day doesn’t turn into a downward spiral.) I think there’s something about knowing I’m headed in a direction that I want to be that staves off buying that I do when I’m not taking care of myself.

Most of us shape our relationship with spending around a steady or predictable paycheck. We get programmed early in life so changing those thought process and habits can take time, but if you pay attention to yourself and are honest about your motivations and aspirations, you can reshape your spending habits and instincts in a way that fits your ideal freelance life.